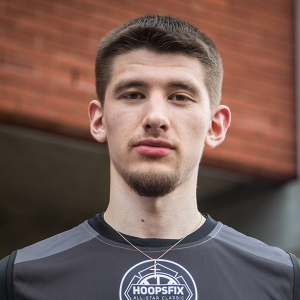 A former MVP at the Hoopsfix All-Star Classic having earned the accolade in the 2015 Under-17 game and recently picked up All-Conference and Finals MVP honours in his prep year at Woodstock Academy. Juozapaitis is heading to Flagler College next year. Fourth HASC appearance.

The 17-year-old has fond memories of the HASC after going off in last year’s Under-17 game as he received the MVP award. Juozapaitis(6’3″) was recently co-MVP alongside teammate Shaquille Walters as Peckham Pride completed a perfect season with victory in the U18 National Championship title game.

The 16-year-old only started playing basketball two years ago and has stayed with Peckham Pride during that time. Recently, Juozapaitis was part of the squad that claimed third place at the U18 Final Fours.

Juozapaitis, originally from Lithuania, one of the most basketball crazy nations on the planet, moved to England aged 10 and after a search found current club Peckham Pride where he has become one of the best Under-15s in the country. He has won back to back U15 national titles, as well as the U16 National Cup in 2014. A versatile wing, Juozapaitis can play both inside and out and has range on his jumpshot out to the three point line.