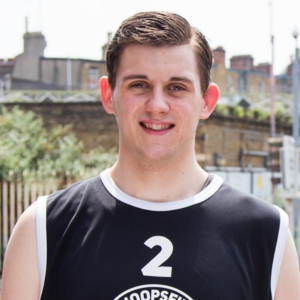 A third appearance at the Hoopsfix All-Star Classic for the England Under-18 forward after playing in the 2014 and 2015 editions. Langton was a starter in Charnwood’s EABL Championship winning team, and has represented his country at European Championships the past two summers.

The Leicester-born big was another player to win bronze with the England U16s in Macedonia last year. Langton is also making the step up with the under-18s with the 6’10” forward/centre named to the preliminary squad list before playing in the Haris Tournament. Another HASC returnee.

The tallest player in the under-16 game at 6’10”, Langton sent ripples through the UK hoops community when he broke a backboard on a putback dunk earlier this season. First picking up a ball at 11, Leicester Dynamite is the only he club has played for and he made his national team debut with the U16s this year in Slovakia.