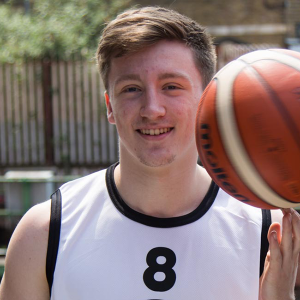 Another HASC regular, the England Under-18 guard returns for his third year having previously played in the Under-16 and Under-17 games. Mitchell competed at the European Championships last summer and was a key figure for Nottingham Hoods in NBL D2 action this season.

Mitchell was part of England’s promotion-winning squad at last summer’s U16 European Championship, in what was his second year with the national team. The 6’0” guard played for the under-18’s at the Haris Tournament in December, and has previously scored 83 points in a game. This is his second HASC.

Mitchell has been a long recognised name on the British hoops scene since leading the East Midlands to a surprise win in the U13 inter-regional tournament in 2011. The 5’11” point guard watched his first game at 2 months old and his career has gone from strength to strength since then, winning numerous honours and awards, and once scoring 83 points in a game in 2012.