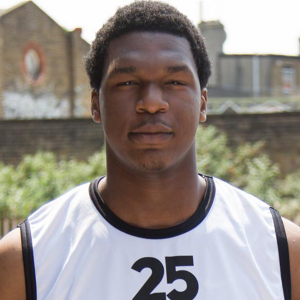 The Wake Forest commit returns to the Hoopsfix All- Star Classic having featured in the first event back in 2014. Japhet-Mathias is currently in the England Under-18 squad having previously played in two European Championships at Under-16 level. After a season at Vermont Academy in the US, the 6’11” big man returned to England and had a brief spell in NBL D1 with Kent Crusaders.

Japhet-Mathias stumbled into the game basketball after playing as a favour for a nagging friend. He still has only been playing for two seasons, but won an U15 National Title last year and an U16 Cup title this season. Japhet-Mathias attended the prestigious Jordan Brand Classic International Tour camp in Barcelona in March, for the top 40 under-16 players in Europe, and represented England Under-16s a year young last season.