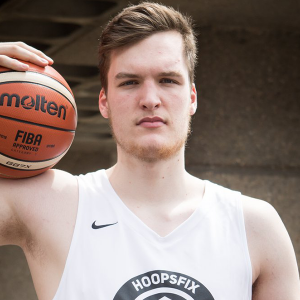 Hughes was selected as part of the rosters for the Class of 2020 game, which did not take place due to the COVID-19 pandemic.

An EABL Championship winner with Barking Abbey in 2018, the towering seven-footer also represented GB at the FIBA Under-16 European Championships the previous year.

Represented the first Great Britain Under-16’s team last summer having previously been captain of England at Under-15 level and Hughes was a starter on the Barking Abbey EABL Championship winning team this past season. Debut HASC appearance.